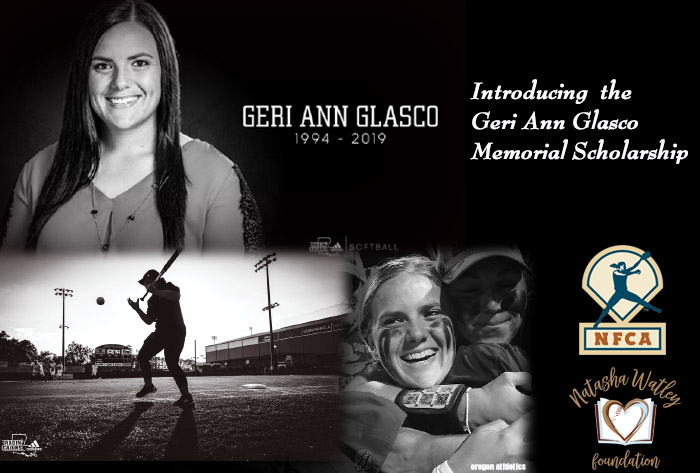 LOUISVILLE, Ky. – The National Fastpitch Coaches Association has announced the addition of the Geri Ann Glasco Memorial Scholarship in partnership with the Natasha Watley Foundation (NWF) and the Glasco Family.

The scholarship is dedicated in the memory of Geri Ann Glasco, an aspiring coach and elite former student-athlete.

Glasco, a 24-year old University of Louisiana volunteer assistant softball coach, was tragically killed in a multi-vehicle accident on January 24. The scholarship has been created to honor her memory and encourage and inspire young softball coaches and their pursuit of education.

The scholarship will be awarded to one female assistant coach in the first five years of her career at the collegiate level.

Each year the scholarship will cover costs associated with attendance to the NFCA National Convention in December. The memorial scholarship includes registration fees, travel, and rooming costs related to the trip.

NFCA member coaches who are interested in applying or nominating a fellow coach may access the scholarship in their NFCA Coach’s Box. The application deadline will close on Sept. 1 of each year.

Glasco, a four-time NFCA All-Region honoree who played at Georgia in 2013-14 and Oregon in 2015-16, had a passion for the game of softball and a love for the softball community. Glasco was just weeks away from beginning her coaching career alongside her father, Louisiana head coach Gerry Glasco, in the dugout this season.

“The NFCA is honored to partner with the Natasha Watley Foundation to create the Geri Ann Glasco Memorial Scholarship,” said NFCA Executive Director Carol Bruggeman. “The NFCA Convention will open many doors to the scholarship recipient as attending the Convention is a top-notch educational experience and quite frankly, can be life-changing. The recipient will learn from the best speakers/clinicians in the nation as well as many high-level professionals in our mentoring/networking sessions. The NFCA will honor Geri Ann’s legacy for many years to come.”

For information on the Natasha Watley Foundation-Glasco Family Fund and to make a donation, please visit https://natashawatleyfoundation.org/.

The Natasha Watley Foundation (NWF) was founded by two-time Olympic medalist Natasha Watley to create opportunities for girls in under-served communities to learn and play the game of softball. NWF uses the medium of sport to inspire young women to reach their full potential while fostering character development and awareness of social issues that affect women.