ESPNU/ESPN2
ESPNU and ESPN2 will begin their slate featuring the back-to-back National Champion Florida Gators hosting No. 20 Tennessee (March 18) and traveling to No. 6 LSU (March 26). Overall, the schedule will feature 17 ranked teams including 16 appearances from top 10 teams; approximately 90% of the total games feature a ranked team. Additional highlights:

Please note: Not all ESPN3 games are exclusive. Schedules are continuously updated at ESPN3.com

Longhorn Network
Longhorn Network is the home of No. 24 Texas softball, airing 33 Texas home games this season. Non-conference play vs. in-state rivals (UTSA, North Texas, and Texas State) will be televised in March before Longhorn Network airs 10 games vs. Big 12 opponents (t-No. 22 Baylor, Kansas, Oklahoma State and Texas Tech) in April and May. The complete Longhorn Network schedule and additional highlights can be found here.

We have used the Tanner Tee daily with younger 7 -8 year old softball players including 14u-18u upper level travel ball and high school athletes. The tee has taken many months of daily use and has performed great….it is highly durable and super easy to store and carry. We give the Tanner Tee a FIVE STAR recommendation!

All rankings are per USA Softball (March 1)

Southeastern Conference softball on national television tripled last year with the launch of SEC Network. The 2016, SEC softball television expansion continues with the addition of “Bases Loaded” and an all-softball SEC Network weekend added to the more than 70 games scheduled across ESPN networks.

SEC Network swings into its 50+ game-schedule this spring exclusively airing Softball games March 12-14. The network will feature eight games from four series for the start of conference play over Saturday, Sunday and Monday. The weekend’s games are highlighted with a matchup of the 2015 NCAA National Champions, Florida, facing the 2015 SEC Champions, Auburn, in a three-game series.

The network closes out the regular-season with another innovation: a softball “Bases Loaded” show on Sunday, May 8, the final day of games prior to the SEC Tournament. SEC Network’s three-hour show will mark the first time the Bases Loaded concept has been used in the softball regular-season.  It will swing through the best moments of up to 14 teams scheduled to face off that day.

After a successful first year, SEC Network will continue to air every First Round and Second Round game in the SEC Softball Championship. The Semifinals will air on ESPNU and the Championship on ESPN. SEC Network’s on-site studio plans for the tournament will be announced closer to the event’s date.

*All times are eastern unless noted different and game schedules are subject to change. Check local listings. 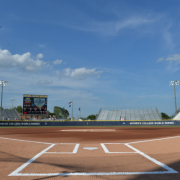 The Game of Softball