Premier Girls Fastpitch (PGF) National Championship Tournament 12u, 14u, 16u and 18u championship game results.

The PGF National Championships attract the top elite level travel teams from all over the US.  The event is held every year in Southern California and run mid July through the first week in August.

Teams are pre-qualified by the previous year’s finish, or through a National qualifier tournament, or were invited by PGF to attend. 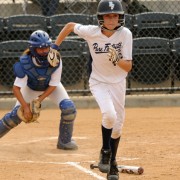 2014 PGF Softball National Championship Order of Finish 12u and 18u